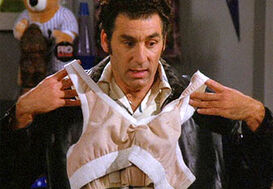 Frank: "You want me to wear a bra?"
Kramer: "No. A bra is for ladies. Meet...the Bro."
—Frank Costanza and Cosmo Kramer

The Bro, also called the Manssiere, was a bra designed for men to help support their upper bodies. It was connected in the back by velco and made the wearer feel lose and free to move. It was created by the genius that is Cosmo Kramer, but the idea was originally conceived by Frank Costanza. They try to sell it to a bra company, but they are unable, as Frank argues with the man, his friend who wants to date Estelle. However, Kramer is later able to get German tourists interested.

Retrieved from "https://seinfeld.fandom.com/wiki/Bro?oldid=24034"
Community content is available under CC-BY-SA unless otherwise noted.