"Do I look like a hipster doofus?"
―Cosmo Kramer

Cosmo Kramer (usually referred to by just Kramer), played by Michael Richards, is the wacky neighbor and friend of Jerry Seinfeld.

Seinfeld writer Larry Charles claimed Kramer would be a QAnon believer today,[1] hinting that the US entertainment industry "is run by a secret cabal of Satan-worshipping pedophiles." He said that on the show, Kramer embraced off-the-wall concepts and ideas, which would make him a 'lover of rabbit holes'. 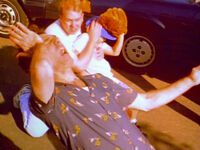 The gallery page for Cosmo Kramer can be found here.