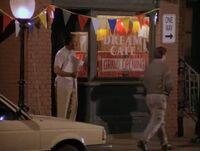 The Dream Cafe was a restaurant that was owned by Babu Bhatt. In The Cafe, Jerry watches as people just walk by the Cafe. After long contemplation, Jerry finally goes in. When Jerry goes in, he is treated like a God, as he is the first customer. Later, Elaine and Kramer go there, causing problems. Later, Jerry suggests that instead of serving all foods, that he serves just Pakistani food. A week later, Jerry returns, and is called a "very bad man", as nobody has come. The Cafe is not seen again, so it probably went out of business, as Babu's next appearance was him working at Monk's Cafe.