Though currently retired, we learn in "The Understudy" that Frank once worked as a salesman selling Christian artifacts and that he is fluent in Korean. He also claims to have spoken to Unification Church leader Sun Myung Moon. Frank is an exceptionally good chef (he spent time as an Army cook with the "Fighting 103rd" during the Korean War), as long as he can overcome his fears of accidentally poisoning people with his cooking (which showed the rebuttal in "The Fatigues", in which he destroyed his food after seeing Elaine Benes' co-worker at the J. Peterman Catalog, Eddie Sherman, choking).

Despite being described, by Jerry (in "The Suicide"), as bald, Frank is usually depicted with a full head of hair, although he may wear a toupee.

His hobbies include listening to Latin American music on vinyl records, collecting issues of TV Guide and playing pool. He invented an alternative to Christmas known as Festivus, due to his disgust with the commercialism of Christmas and his dislike of tinsel decorations, which was featured in "The Strike". Frank was also the co-creator of the "Bro" (he proposed the name "Manssiere"), a male bra he developed with Cosmo Kramer in "The Doorman" due to his rather 'feminine' breasts. Perhaps before the character had been entirely established, Frank was in his first episode, "The Handicap Spot", a leading member of the United Volunteers, where it is common to give away wheelchairs.

Frank was often seen annoyed with George Steinbrenner's business decisions as seen when he asked about him trading some of the players for the New York Yankees.

Frank's several flaws include a paralyzing fear of mice, rats and other forms of household infestation. Even the mention of mice in his household horrifies Frank, as seen in "The Raincoats, Part 2." He also has a 'phobia' which disables him from spending his silver dollars, which he has collected since 18 years of age. Frank seems to have a predilection for squirrels. In "The Conversion" where George is considering converting to the Latvian Orthodox Church, Frank asks if this is the group that goes around mutilating squirrels and asks specifically that George stays away from squirrels. He reacts violently if someone asks him to take off his shoes (on more than one occasion, George mentions that he wears them in the pool) because he believes that his feet have bad odor.

Estelle, while never referred to that way on the show, was said by both Larry David and Jason Alexander to be Jewish. They also said in numerous interviews that George was "half-Jewish," implying that Frank was not. In "The Finale, Part 2", Frank is seen nodding in prayer, led by Rabbi Glickman, with Helen and Morty Seinfeld. In the episode "The Fatigues", it is implied that Frank is a member of the Knights of Columbus, an all-Catholic fraternal organization. And in the episode "The Doll", it is implied that Frank's background is Italian, when he thinks the maestro (Bob Cobb) may have a photo of his long lost cousin Carlo in Tuscany. At the end of the episode, during the credits, Frank goes to Tuscany to meet his supposed cousin. When he gets there, he finds out the man is not in fact his cousin after he reveals that his name is Giuseppe, not Carlo. Frank appears to have a strong taste for traditional Eastern-European food, such as kasha and rye bread.

In the episode "The Caddy", when New York Yankees owner George Steinbrenner came over to tell Frank and his wife about their son's (apparent) death, Frank seems impartial to the situation, instead demanding to know why Steinbrenner traded Yankees player Jay Buhner away for Ken Phelps.

As shown in "The Cigar Store Indian", Frank and Estelle live at 13-44 Queens Boulevard.

In "The Finale, Part 2," Frank and Estelle attend the trial of Jerry, Elaine, George, and Kramer in Latham County. During George Steinbrenner's testimony of George, Frank Costanza shouts to Steinbrenner "How could you give $12 million to Hideki Irabu?" Judge Arthur Vandelay had to break up the argument. When the four of them were found guilty, Frank was shown trying to wake Estelle from her faint so that they can beat the traffic back to New York.

Frank and George have an estranged relationship and do not get along at all. Frank wants George out of his house and out of his life, and George wants to get away from his father and mother. George's attempts to be independent of them in the first few seasons of the show were constantly defeated by straitened circumstances but he eventually finds work and a permanent living situation for himself. 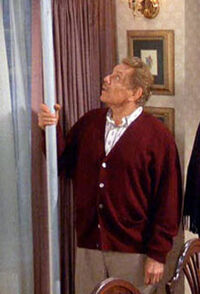 The gallery page for Frank Costanza can be found here.