"It's like a creature out of Greek mythology. She was like part woman, part horrible beast."
―Jerry

Gillian is Elaine's friend and writes for the L.L. Bean catalog. Jerry gets set up on a date with her in "The Bizarro Jerry". Gillian is played by Kristin Bauer.

While Gillian is a beautiful woman, she has one tragic flaw: large meaty hands totally lacking in femininity. In other words: she has man-hands. Jerry tries to make the relationship with Gillian work, but cannot get over her hefty hands. He would even prefer Gillian have cool hook-hands or no hands at all over the hands she was born with. 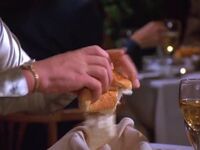 Gillian is incredibly strong for a woman, probably because of her man-hands, and injured Jerry's wrist when she abruptly stopped him from rifling through her purse.

Retrieved from "https://seinfeld.fandom.com/wiki/Gillian?oldid=28326"
Community content is available under CC-BY-SA unless otherwise noted.