Helen Seinfeld, played by Liz Sheridan, is a fictional character on Seinfeld. She is Jerry Seinfeld's mother. Her husband—Jerry's father—is Morty Seinfeld. By the time the series opens, the two have retired and live in Florida.

She thinks Jerry is perfect. Helen's catchphrase in the series is her rhetorical question about Jerry, "How could anyone not like him?"

According to Jerry, Helen has never once set foot in a natural body of water.

Anytime Jerry's father is on the phone Helen is always talking with him on the same line.

As shown in "The Raincoats" (both parts), Helen and Jerry have an equal hatred to Newman. Like Morty, Helen does not like the Costanza family.

In "The Finale, Part 2," Helen and Morty were seen attending the trial of Jerry Seinfeld, Elaine Benes, George Costanza, and Cosmo Kramer in Latham County. 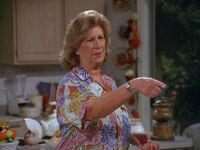 The gallery page for Helen Seinfeld can be found here.

Retrieved from "https://seinfeld.fandom.com/wiki/Helen_Seinfeld?oldid=28766"
Community content is available under CC-BY-SA unless otherwise noted.