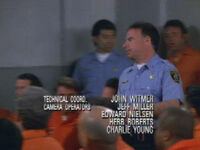 Jon Hayman is an American actor, writer and Seinfeld crew member. Most notably, he played Donald Sanger AKA The Bubble Boy; he also had the penultimate lines in “The Finale”, where he played a prison guard: “All right, Seinfeld, that’s it. Let’s go.”

Jon appeared in "The Bubble Boy", "The Pilot", and "The Finale".

Retrieved from "https://seinfeld.fandom.com/wiki/Jon_Hayman?oldid=21621"
Community content is available under CC-BY-SA unless otherwise noted.