Kenny Kramer lived next-door to Larry David and was the basis of the character Cosmo Kramer. 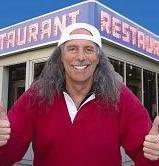 Jerry Seinfeld and Larry David both wanted to name the character Kessler at first, but decided the name "Kramer" was too good to ignore. They wanted the name Kessler because they thought that Kenny might exploit the fact that his name is used in Seinfeld, which he does. Kenny had several financial demands for the use of his name, all of which were met.

Kenny Kramer gives tours around New York City showing and explaining about the people and places mentioned in Seinfeld. In the episode "The Muffin Tops", Cosmo Kramer lends his stories to J. Peterman. After receiving money from Peterman, Kramer tours New York City as the "real J. Peterman."

Retrieved from "https://seinfeld.fandom.com/wiki/Kenny_Kramer?oldid=26189"
Community content is available under CC-BY-SA unless otherwise noted.