“Male Unbonding” is the fourth episode of Season 1 of Seinfeld. It first aired June 14, 1990. It was written by Larry David and Jerry Seinfeld, and was directed by Tom Cherones.

George tells Jerry that while seeing a play with his girlfriend, he put his hand in his pocket to get some money and accidentally got some dental floss stuck to his hand. George worries that his girlfriend is going to leave him because of it.

Jerry has problems with a childhood friend, Joel Horneck, who persists in keeping in touch with him. He does not like Joel, who does not pay attention to anything that Jerry says. Jerry claims that the reason he has not broken up the relationship is because Joel is a man; George suggests that he should pretend that Joel is a woman and break up normally. Jerry therefore attempts to break up with Joel at Monk's Cafe, but when he does so, Joel breaks into tears. As a result, Jerry changes his mind and agrees to take him to see the New York Knicks, although he was supposed to take George.

As George tells Jerry that his girlfriend no longer wants to see him, Jerry mentions to George that he gave away his ticket to Joel. George does not go to the game because he does not know Joel, so Jerry decides to give Joel both tickets, claiming that he cannot make the game because he is tutoring his nephew. Later, when talking to his platonic girlfriend Elaine, she tries to provide Jerry with a list of excuses to help him avoid Joel. He later discovers that Joel took Kramer to the game and that Joel is in the building. When Joel meets Jerry and Elaine, Joel invites them out to another Knicks game. They come up with more unusual excuses in an attempt to avoid going out. However, Joel then gets out a newspaper and tries to organize a time when they can all meet, weeks in advance. Jerry realizes that no matter what excuses he comes up with, he cannot avoid him.

Kramer, working under the name "Kramerica Industries", conceptualizes building "a pizza place where you make your own pizza pie." Jerry and George try to persuade Kramer to forget the idea, but Kramer is determined to go on with it. Kramer's pizza parlor idea reappears in the later episode "The Couch" in season 6. 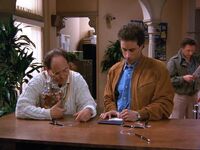 The gallery page for Male Unbonding can be found here.

Retrieved from "https://seinfeld.fandom.com/wiki/Male_Unbonding?oldid=28277"
Community content is available under CC-BY-SA unless otherwise noted.