Inventor and Salesman of "The Executive Raincoat"

Morty Seinfeld, played by Barney Martin, is a fictional character on Seinfeld (1989-1998). He is Jerry Seinfeld's father. His wife, Jerry's mother, is Helen Seinfeld.

Morty made a living selling raincoats under a man named Harry Fleming for 38 years and considers his invention of 'the beltless trenchcoat' (also called 'the executive') his greatest accomplishment. Morty refuses to let Jerry pay for a meal anytime they go out to eat, even if he has 0 cash to pay the bill. He always sticks up for Jerry when he feels like his son is being slighted, even when Jerry himself isn't bothered at all (The most notable instance of this was in "The Pen"). He hates velcro because he can't stand the tearing sound it makes when separated.

He and Helen are retired and have lived in a series of condo complexes in Florida, the longest-lasting of which has been Del Boca Vista. He was the president of the tenant's board of The Pines of Mar Gables Phase II for years, til Jerry bought him a Cadillac (in "The Cadillac"), arousing suspicion among his neighbors, particularly Jack Klompus, that he was stealing from the board coffers. He was impeached and resigned when the tie-breaking voter Mabel Choate turned against him upon remembering that Jerry had stolen a loaf of Marble Rye bread from her (as seen in "The Rye"). His impeachment scene included a parody of Richard Nixon's famous wave as he, Helen and Jerry get into the Cadillac that sparked the trouble in the first place.

In "The Shower Head," Morty and Helen stay with Jerry for short period while Morty has an appointment with a spine specialist. They managed to get a new house in the Phase III part of Del Boca Vista when Frank Costanza and Estelle Costanza (who originally plotted to move there) didn't want to leave George Costanza.

In "The Money," Elaine Benes later gets Morty a job at J. Peterman Catalog. Upon returning to his company, Jacopo Peterman fires Morty when he complains that they are working to late into the night... even though it was only 5:30 PM.

In "The Wizard," Jerry gives his father the Wizard during his visit which Jerry claims he got from a deal at only $50. Morty is only impressed by it being a "tip calculator", though Jerry claims it does other things. Later he discovers that Cosmo Kramer has moved down there, to join the other retirees. Morty, who can't run for president of the condo association because he was impeached from their previous condo, decides that Kramer should be elected condo board president of Del Boca Vista phase III, so Morty will run things from behind the scenes, like a "puppet regime". After Kramer received bad press by going barefoot to a club when he couldn't find his shoes, Kramer suggests to Morty that they buy each member of the board one of those Wizard "tip calculators" by making contact with Bob Sacamano's father to help them. Sacamano's father comes through with knock-off "tip calculators" called "the Willard", which can't calculate tips properly and in some cases lack a full complement of numerals, costing Morty and Kramer the election, causing everyone to vote for the candidate in the wheelchair. Kramer decides to move back to New York upon coming out of retirement. When Morty makes a comment about the Wizard to Jerry, he insists loudly that it has other features.

In "The Finale, Part 2," Morty and Helen attend the trial of Jerry, Elaine, George and Kramer in Latham County. 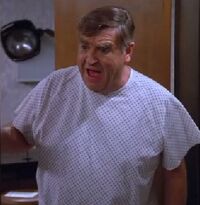 The gallery page for Morty Seinfeld can be found here.