Start a Wiki
watch 03:59
'Seinfeld' Profile: Newman
Do you like this video?

"The Revenge" (Voice Only)

Larry David (Voice in "The Revenge")

"Maybe he's an enigma, a mystery wrapped in a riddle."
―Elaine Benes about Newman.[src]

Newman is a recurring character on Seinfeld, played by Wayne Knight from 1991 until the show's finale in 1998.

In the show, Newman is a mail carrier who lives at 129 West 81st Street, New York City, the same apartment building as Jerry Seinfeld and Cosmo Kramer. Newman lives in Apartment 5E, on the same floor as Jerry and Kramer. Originally conceived to be "the son of the landlord [who] 'tells' on everyone," Newman evolved as the series progressed into a scheming mailman who related with Kramer, but nursed a grudge against Jerry. He is first mentioned (but does not appear on camera) during the original version of the episode "The Revenge". Newman was here voiced by the show's co-creator Larry David (although Knight later dubbed a new version for syndication with his own voice). In the episode, Newman is characterized by Kramer as being depressed and is constantly threatening to kill himself because he has no job and no future. It is unclear if Newman is his first or last name, but it's generally believed it is his last name, as he is referred to as 'Mr. Newman' by the Judge in "The Ticket." Aside from this, only the name Newman is ever used in reference to him.

In "The Bottle Deposit," the farmer's daughter shouts, "Goodbye, Norman!" However, this is a mistake on the part of the actress (Karen Lynn Scott). It was left in because it was considered funnier.

Interestingly enough, there was a second episode where Newman was in the bathroom with a female date waiting in bed where she yells out, "Hurry up, Norman!" Newman was caught in a compromising position with Kramer's mother, Babs, after Kramer, Elaine, and George walked into his apartment at the end of "The Switch." Newman's large appetite is exhibited when he fantasizes about eating Kramer after he was basted in butter and seasoned with Parmesan and oregano in the episode "The Butter Shave." Newman is a smoker, although it's not mentioned what brand he smokes. (It might be fictional.)

In "The Finale, Part 2," Newman attends the trial of Jerry, Elaine, George, and Kramer in Latham County. During the trial, he is seen eating some food. While the jury was out deciding on the verdict, Newman was seen eating food in his car. When the four are found guilty, Newman has a choking reaction as he was eating food at the time. The deleted scene before the trial had Keith Hernandez telling Newman that he has been doing some announcing. He also tells Newman that he is staying at the Ramada during the course of the trial. Two other deleted scenes had Newman trying to leave the courtroom before being identified by Detective Blake and Ramon for his involvements with the defendants.

Newman's role is primarily as a nemesis to Jerry and a collaborator in the elaborate and bizarre schemes of Kramer. He is also the closest thing the show has to a main antagonist. Often described as Jerry's "sworn enemy" ("The Andrea Doria"), his character is cunning and occasionally acts like a weasel: when confronted by an angered Jerry, Newman always cracks under the pressure, spilling his guts. He speaks often in a humorously sinister tone (mainly to Jerry). Jerry refers to Newman as "pure evil" on more than one occasion. The two generally greet each other this way, Jerry in a distrustful, baleful voice, Newman in a falsely jovial one:

The origin of the Seinfeld/Newman feud is never revealed. Newman's dislike of Jerry appears to stem from anger at Jerry's status as a relatively famous comedian. Newman considers Jerry to be undeserving of his fame, referring to Jerry's audience as a "half-soused nightclub rabble." Newman's own talents as a poet and wordsmith are not inconsiderable, yet similar recognition to Jerry has so far eluded Newman. When asked about why the character Jerry hates Newman, Jerry Seinfeld explained it in the Season 3 DVD inside look of the show:

"He was the first person on the show, my own show, who was coming on to sabotage me in some way. And so why would I not hate him forever for that?" Newman's character is a frequent source of annoyance to Jerry, such as in attracting fleas to the apartment ("The Doodle"), and generally making Jerry's life more difficult. However, the depth of their enmity seems to vary between episodes - or even within the same episode ("The Soul Mate") -- and Jerry sometimes seems to consider him merely an annoying neighbor, much like Kramer, rather than an outright enemy. At times they even work together on some scheme, though with some reluctance on Jerry's part (and usually with mutual friend Kramer as a buffer). In the final scene of "The Soup Nazi" their interaction is such that they could be taken for friends (although this is clearly based more on their shared love of the Soup Nazi's soup than on anything else). In "The Old Man" Jerry casually mentions "a couple of friends," meaning Kramer and Newman - thus calling Newman a "friend." In any event, Newman often seems quite amused at how effectively he irritates Jerry (which of course only irritates Jerry all the more), although any battle of wits between them rarely leaves Newman the victor.

Newman is a good friend of Kramer's, and the pair are forever participating in various get-rich-quick schemes. In "The Bookstore," Newman and Kramer decide to use a rickshaw to transport people from place to place. In "The Old Man," Newman and Kramer try to get good records to get cash. "The Bottle Deposit" has the best use between Kramer and Newman scheming to bring bottles in a mail truck all the way to Michigan. Even Newman's friendship with Kramer, however, can be overcome by Newman's obsession to win in any situation. In "The Label Maker," he and Kramer play a game of Risk, and when Kramer leaves the gameboard in Jerry's apartment for safekeeping, Newman goes so far as to sneak into Jerry's apartment via the fire escape with intent to rearrange the pieces' layout in his favor, although he is detected and flees before he actually changes anything.

As Kramer puts it in the episode "The Reverse Peephole," Newman can climb trees "like a ring tailed lemur," an ability he claims to have practiced in the Pacific Northwest. Despite his obese girth, Newman is a "fantastic" tennis player ("The Switch") and a nimble runner. He is seen running athletically in several episodes.

Newman takes his job as a mailman very seriously (as long as it is not raining, a violation of the postal worker's creed); he ends up impulsively protesting the idea of any mail being considered "junk." However, he is known to use his job for corrupt purposes, such as purposely withholding mail for blackmail revenge, using the Union to get himself out of jail, or reading Elaine's mail. In "The Label Maker", Jerry also agreed with George that Newman is "merry," which appeared to be a compliment of sorts.

Newman's angry rants directed against Jerry and, at times, the United States Postal Service in various episodes tend to be bombastic and verbose, displaying an impressive command of language. One of his most well known speeches takes place in "The Finale", after Jerry refuses to take him to Paris:

"All right! But hear me and hear me well! The day will come, oh yes, mark my words, Seinfeld! Your day of reckoning is coming, when an evil wind will blow through your little playworld and wipe that smug smile off your face! And I'll be there in all my glory, watching, watching as it all comes crumbling down!"

Jerry Seinfeld has been quoted as saying that he almost feels sorry for Wayne Knight, as his portrayal of Newman has typecast him to the point that "everywhere he goes, he must be greeted with 'Hello Newman.'" In fact, during the Seinfeld DVD's special features, Knight recounts an occasion when he was having a particularly bad day, where after a series of unfortunate events a fan happened to yell "Hello Newman," This resulted in Knight releasing his long day's built-up anger on the unsuspecting fan.

In the episode "The Suicide" Newman tells Kramer that he can't eat fruit because it makes him incontinent.

Newman is an employee of the United States Postal Service, which is portrayed in the series as a powerful, nefarious organization, albeit also bureaucratic and inept. Upon being arrested in "The Engagement," Newman assures Kramer and Elaine that they will not be prosecuted: "Don't worry about a thing. In twenty minutes, that place'll be swarming with mailmen. We'll be back on the street by lunch."

In "The Junk Mail," Kramer realizes the Postal Service has become obsolete and starts an anti-mail campaign. He is abducted by Post Office security men. Newman attempted earlier to dissuade Kramer by pleading, "You don't know the half of what goes on here!" At the end of the episode, for his efforts to save Kramer, Newman is seen escorted by Postal Service employees with a bucket on his head, pleading for Kramer to "tell the world my story."

In "The Package," Newman's business card is shown. It says only "NEWMAN." In "The Junk Mail," he is referred to only as "Postal Employee Newman."

Newman claimed that he once worked the same postal route as murderer David Berkowitz ("Son of Sam"). When asked what it was like, Newman commented the route had "a lot of dogs" but joked that they only told him "to lay off the snacks." Newman retains Berkowitz's mailbag as a valuable collector's item. When the police come to arrest him in "The Engagement," his first words to them are "What took you so long?", the same words Berkowitz used upon being arrested.

Newman makes several other outlandish claims about the U.S. Postal Service including:

Aside from the four main characters, Newman is the character who appears in the most episodes of Seinfeld. The cashier in Monk's Cafe, Ruthie Cohen, played by Ruth Cohen, may have actually been seen in more episodes than Newman, but is only credited as appearing in two episodes. Ruthie Cohen made her first appearance in Season 4, Episode 1 (The Trip, Part 1), although her name is not revealed until Season 7, Episode 10 (The Gum). Newman can be seen in 47 episodes (if two-parters are counted as two episodes) or 48 if The Revenge is included. These are: 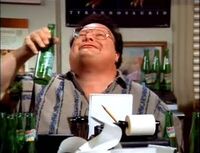 The gallery page for Newman can be found here.

Retrieved from "https://seinfeld.fandom.com/wiki/Newman?oldid=28902"
Community content is available under CC-BY-SA unless otherwise noted.