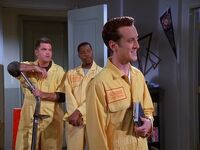 Sunshine Carpet Cleaners is the name of a fictional carpet cleaning business, which doubles as a front used to brainwash people and recruit them into a religious cult. They are only mentioned in "The Checks".

While cleaning the carpets at Yankee Stadium, they choose to recruit Mr. Wilhelm, but refuse to recruit George Costanza, much to his dismay.