WikiSein
Register
Don't have an account?
Sign In
Advertisement
in: Episodes, Season One, Larry David Scripts,
and 6 more

“The Seinfeld Chronicles” (also called "Good News, Bad News" or simply known as "Pilot") is the pilot episode of the NBC series, Seinfeld. It originally aired on July 5, 1989. It was written by Larry David and Jerry Seinfeld, and was directed by Art Wolff. The original title of the episode was StandUp, but was later changed to Good News, Bad News before reverting to The Seinfeld Chronicles.

The series opens: Jerry Seinfeld sits with George Costanza at Pete's Luncheonette, debating the placement of one of George's shirt buttons. George Strait's "Baby's Gotten Good At Goodbye" is playing in the background. The waitress, Claire, pours each of them a cup of coffee. George frets whether the coffee is regular or decaffeinated, and explains that he does not want caffeine. (Later, Claire implies that she gave him regular, just to annoy him.) Jerry tells George about a woman he met in Lansing, Michigan, named Laura, who is coming to New York. Jerry wonders if she has romantic intentions. The two continue to talk about her after they leave Pete's and go to the laundromat.

The next evening, Jerry tells his neighbor Kessler

(who in all future episodes is known as Kramer) that he thinks he misunderstood the situation with Laura. Jerry then receives a telephone call from Laura, who asks if she can stay overnight at his apartment. Jerry invites her, but is still unsure whether or not her visit is intended to be romantic. George and Jerry continue to debate the issue, with Jerry determined to find the true nature of her visit.

At the airport, George and Jerry continue to try to identify the possible signals Laura might give upon her arrival, with George explaining the meaning of various greetings. However, when Laura arrives, her greeting is ambiguous. Jerry and Laura arrive at the apartment. Laura then removes her shoes and some excess clothing to get comfortable, and while in her feet stockings, asks for wine, turns down the lamp light, and asks if she can stay over for a second night.

As Jerry begins to grow confident, the phone rings for Laura. When Laura gets off the phone, she tells Jerry, "Never get engaged." Jerry then realizes that he has no chance with Laura, but has already committed himself — and his one-bedroom apartment — to an entire weekend with her, including a five-hour sightseeing boat ride. 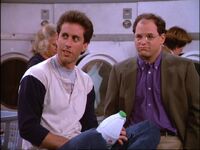 The gallery page for The Seinfeld Chronicles can be found here.