WikiSein
Register
Don't have an account?
Sign In
Advertisement
in: Season One, Larry David Scripts, Jerry Seinfeld Scripts,
and 7 more

"The Stake Out" is the second episode of Season 1, and it first aired May 31, 1990. It was written by Larry David and Jerry Seinfeld, and was directed by Tom Cherones.

Jerry and Elaine have just ended their relationship, but have chosen to remain friends. Elaine invites Jerry to a birthday party; he agrees to go on the condition that she accompanies him to a wedding to which he and his parents have been invited. At the party, Jerry meets an attractive woman. He wants to flirt with her, but is uncomfortable doing so in Elaine's presence. The woman leaves with another man before Jerry finds out her name; however, he learns that she works at a law firm called "Sagman, Bennett, Robbins, Oppenheim and Taft". During the party, Elaine tries to tell Jerry about a dream she had, which featured him. Jerry tries to end the conversation but this results in an argument after the party is over.

Back at his apartment, Jerry's parents, Morty and Helen, sleep over, with Jerry sleeping in Kramer's apartment. He talks about the party and claims that he cannot get the phone number of the woman from Elaine because he does not talk about other women with her; additionally, she is still angry with him. Morty suggests that Jerry "stake out" the woman by waiting outside her office, an idea which Jerry likes. The following day, Jerry and George Costanza perform the stake out, pretending that they are coming to see someone else in the building named "Art Vandelay". They meet the woman, Vanessa, who says that man she left the party with was her cousin. The two then decide to go out on a date.

Later that night, Jerry finds out from his mother that Elaine knows about the stake out. On the day of the wedding, Elaine tells Jerry that the reason that she was angry was because it was the first time she saw him flirt with another woman. They decide that they have to be able to talk more about their relationships if they wish to remain friends. Elaine then reveals that she has recently met a man using a stake out.

For this episode's quotes, see The Stake Out/Quotes. 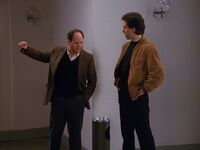 The gallery page for The Stake Out can be found here.