"The Stall" is the 76th episode of Seinfeld. Its original broadcast date was January 6, 1994, and it is part of the show's fifth season. It was written by Larry Charles and directed by Tom Cherones.

While at the movies, Jerry's new girlfriend, Jane, complains to him about the woman in the bathroom who asked her for more toilet paper. That woman is Elaine and she complains about Jane's refusal to help her to her new boyfriend, Tony.

The next day, Elaine meets up with Jerry and tells him about the woman who withheld toilet paper from her at the movie theater. Jerry realizes she is talking about Jane and when he learns Elaine harbors a grudge against her, he goes out of his way to prevent the two from meeting.

George has been hanging out with Tony, his first time ever getting to be friends with a 'cool' guy. Tony invites George and Kramer to go rock-climbing with him. Both accept, but that evening George tries to talk Kramer into not going on the trip. Kramer refuses to back out and theorizes George is secretly in love with Tony.

The rock-climbing trip is a disaster as George shows Tony what stuff he's got in his bag however Kramer's rope comes loose and Tony falls off the mountain. Tony survives, but suffers severe damage to his face. Kramer and George look at the injured Tony and at each other and scream at what they have done. Tony ends the friendship he had with George because of George's carelessness. Making their way back to Manhattan, Kramer and George inform Elaine what has happened to her boyfriend and she freaks out and asks them what happened to his face. Realizing Tony is scarred for life, Elaine breaks up with him.

Jerry is suspicious about what Jane does for a living and after introducing her to Kramer, Kramer tells Jerry she sounds a lot like the phone sex worker named Erica he has been calling. Jerry, Elaine and Kramer confront Jane about it at Monk's Cafe, but she denies it. While talking with her, Elaine figures out Jane is the one who didn't give her the toilet paper she needed at the movies and gets even with her by taking away the toilet paper from Monk's bathroom before Jane can use it. Jane is furious and she breaks up with Jerry and tells Kramer, in her Erica voice, to quit calling her, too. She walks out of the diner, leaving Jerry and Kramer shocked. 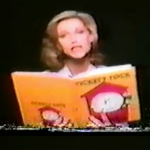