Tia Van Camp is one of Jerry's girlfriends, played by Jennifer Campbell.

The two met on an airplane in the episode "The Airport", when they were seated next to each other after Jerry was upgraded to first class due to a flight cancellation. She is a fashion model, who appears in various advertisement in popular magazines, which she shows to Jerry.

In "The Pick" she dumps Jerry after she sees him picking his nose while stopped at a traffic light. 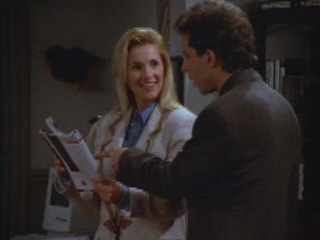 Retrieved from "https://seinfeld.fandom.com/wiki/Tia_Van_Camp?oldid=28214"
Community content is available under CC-BY-SA unless otherwise noted.