Start a Wiki
watch 01:31
'Seinfeld' Profile: Uncle Leo
Do you like this video?

Uncle Leo is Jerry Seinfeld's uncle (his mother's brother), a bit character who is, even by Seinfeld universe standards, eccentric. He is often loud and somewhat boisterous. He lives in New York city, affording him frequent chances to bump into his nephew.

When coming across Jerry, he exclaims, "Jerry! Hello!" with a loud tone and his arms wide open. He often brags about his son and his various accomplishments while working in the Parks Department. He, however, unintentionally became the leader of a different organization that did not like parks (episode 104). Leo's son is never seen but Jerry often refers to him as "cousin Jeffrey". Leo often tries to keep Jerry involved in conversations with him longer than social custom dictates and he becomes offended when Jerry tells him he's pressed for time and has to leave. Subsequently, Leo often tells Jerry's parents about such incidents, leading Jerry to be reprimanded for not wanting to socialize with his family.

In the episode "The Pony Remark" Jerry reveals he doesn't like sitting next to Leo at dinner tables, because he grabs his arm while talking, "Probably because so many people have left in the middle of him talking."

In "The Chinese Restaurant" Jerry refers to Leo as being married and working in an office along with Lorraine Catalano. His wife Stella appears in "The Pen." Leo is depicted as retired from work and no longer married (either widowed or divorced) in all future appearances.

In "The Package," Leo receives a package for Jerry that Jerry seems to think is suspicious. Jerry encourages Leo to open the package while talking on the phone and Jerry hears a loud explosion. However, Leo went mostly unharmed, as a can of oven cleaner he left in the oven exploded, not the package. The explosion leaves Leo with reduced hearing and singed his eyebrows completely off.

In "The Bookstore," Jerry Seinfeld unintentionally has Uncle Leo arrested for shoplifting at a local bookstore. During this episode, we learn that Uncle Leo has a record related to a "crime of passion".

In "The Finale, Part 2," Uncle Leo attends the trial of Jerry, Elaine, George, and Cosmo in Latham County. A deleted scene had him meeting Babs Kramer. After the four of them are found guilty, Uncle Leo was seen comforting Babs Kramer. 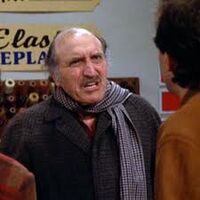 The gallery page for Uncle Leo can be found here.

Retrieved from "https://seinfeld.fandom.com/wiki/Uncle_Leo?oldid=28910"
Community content is available under CC-BY-SA unless otherwise noted.